Every year as the month of May rolls around, the stress level of some of Calgary’s biggest car enthusiasts climbs to peak levels. Driven is a car show that hosts events across all of Western Canada and it pushes many owners to their absolute brink as they budget time and money in a bid to complete their builds for the show. This year saw some of the most last minute fit and finish in order to appear on time, and under the lights of Calgary’s Canadian Olympic Oval.

This year the organizers were pushing heavily on social media to make this the best Driven to date, adding multiple special builds and guest appearances. Even with this push for growth they managed to maintain a certain familiarity which continues to fuel competitors, shops and spectators to come back every single year wanting more and more of what Driven has to offer. 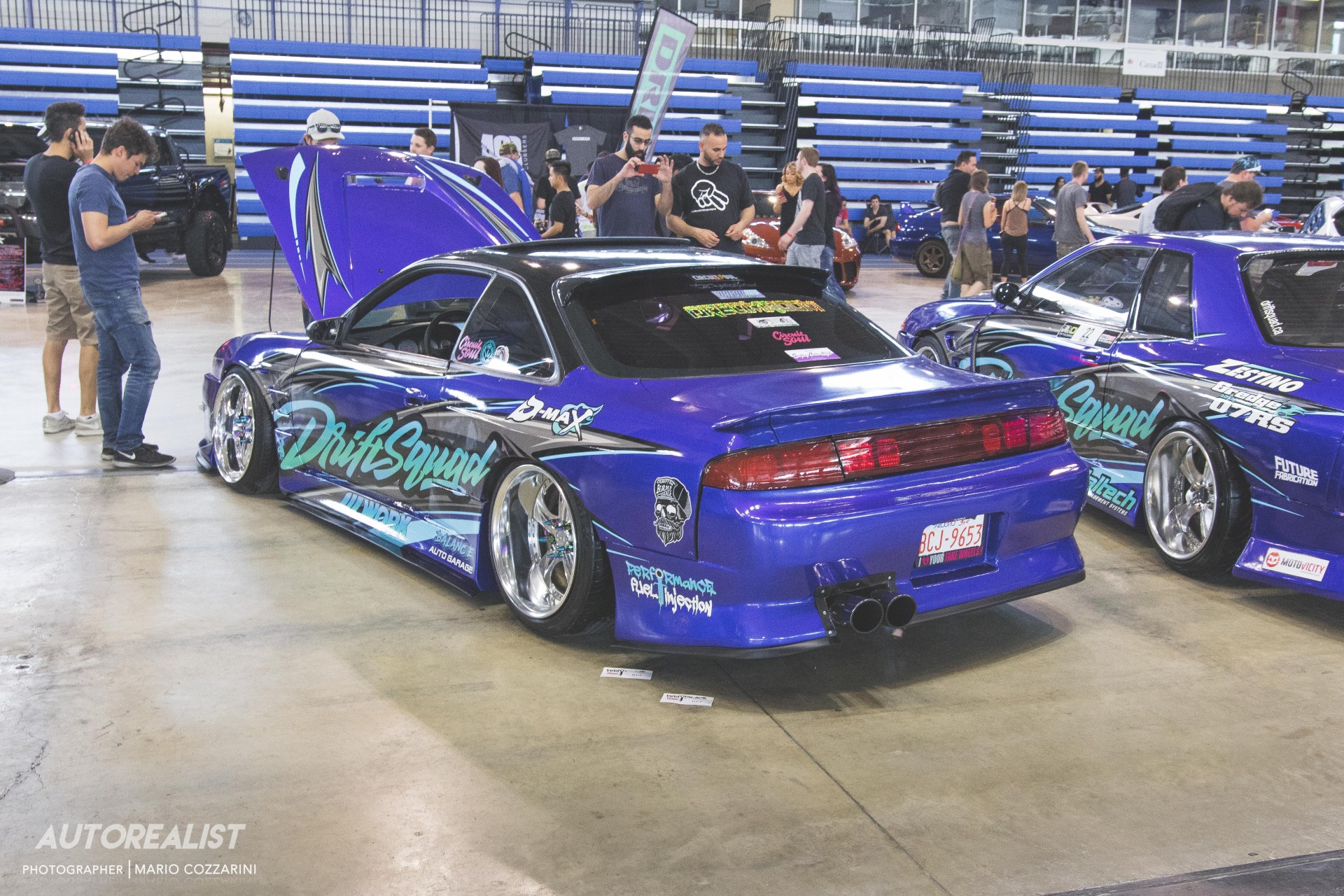 As always, Driven begins the day before with roll-in and setup happening on Friday night. It’s a show in itself to watch so many modified cars and trucks descend upon a single location. Time it right and you’re in with no fuss, but come a little late and you could see yourself queuing with a bunch of other stressed and slightly crazy car enthusiasts. Personally, I love the roll-in as I stop with drivers and quickly chat about their rides and get some fantastic shots of cars on the University campus.

As always we start with our friends at 51-OneFourteen. The Calgary club had 11 out of 14 cars make an appearance with a few owners deciding to take their time with the last few stages of their builds. Skylines, Supras, turbocharged 350Zs, trucks and one very quick Neon were stationed in almost the same place as last year. Unlike last year’s setup however, this year allowed for tons of traffic to come through which is well deserved for the owners but hard for the photographers.

Yes, you are looking at a mostly stock GT-R, but there’s something a little different with this one that will be coming up in a future article. Last week when I was visiting Calgary, Spencer called Colton in some serious trouble as he had broken down on the most dangerous part of Deerfoot. In just one week, they were able to get the transmission out and get the problem fixed; quite a whirlwind of emotions. 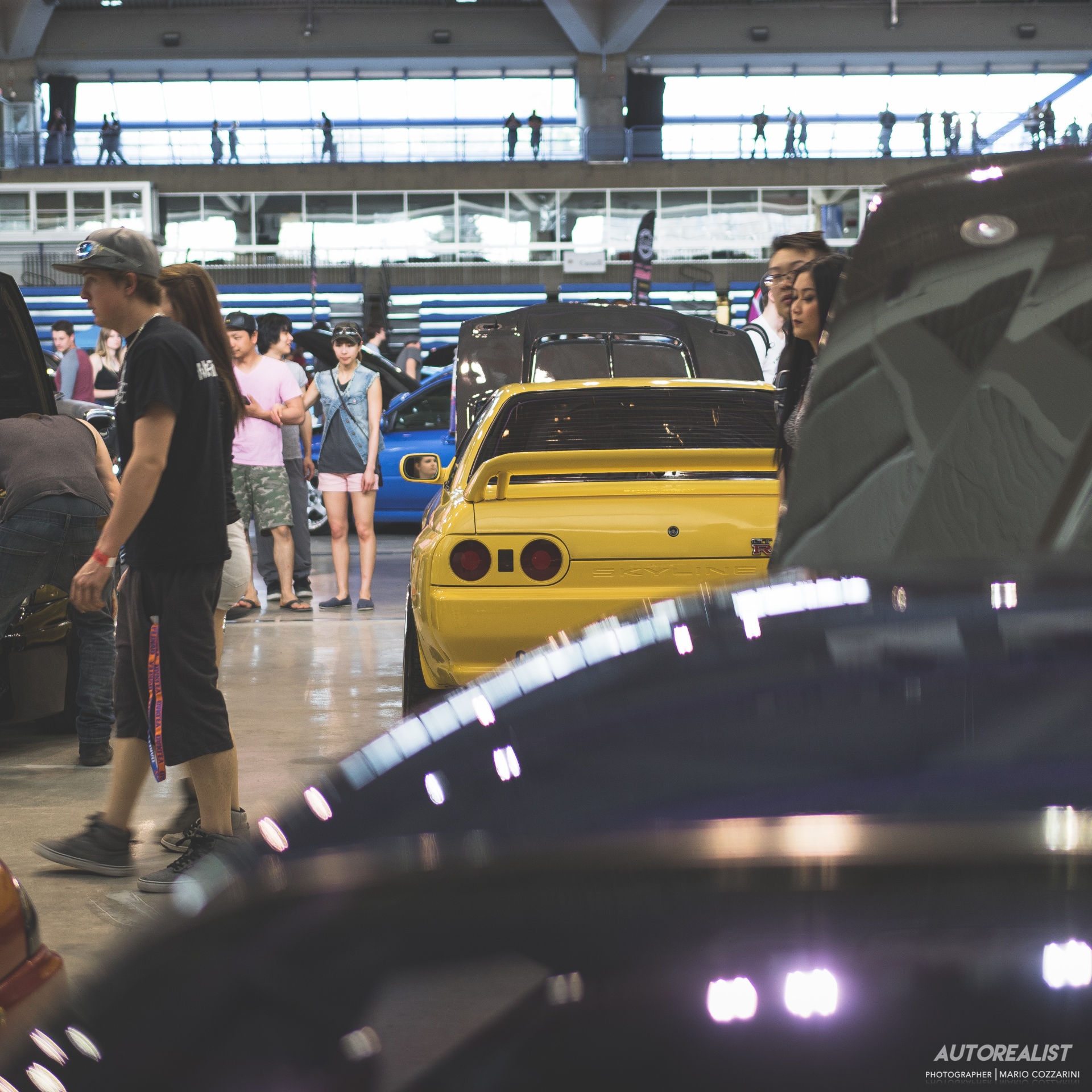 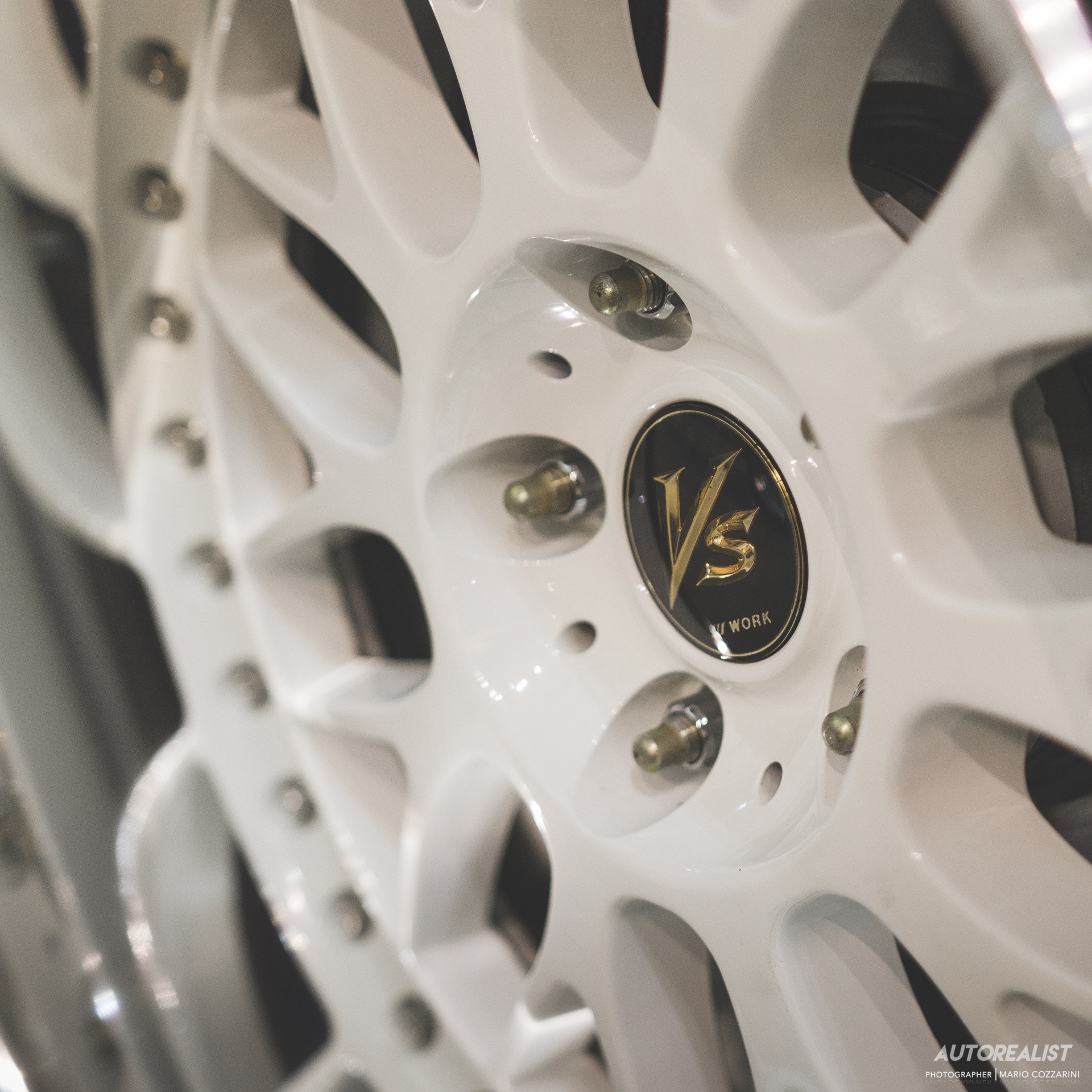 Autodream, who specializes in JDM cars, had quite the lineup highlighted by Mark’s IS 300, Kevin’s GT-R, Nguyen’s S14.5, Brian’s RB34 GT-R, David’s RocketBunny S15, and one of my favourite kits, a Boss S14. These kits (when done right) just ooze presence and classic JDM vibes with a flare of USDM. David’s car had no transmission in it and was in need of some final pieces the day of roll-in, no one escaped the time crunch.

Vex Performance had their booth right in the center, with Jimmy’s 240 rocking center stage, along with Ryan’s Ford Escort. Every year I see that car and wish there were more around… something from the past that we don’t see too often today. Dustin’s S15 is one of the most track prepped cars you will see rolling around in Calgary. I will have an article coming up on this soon just to show you what kind of lap times this thing can put down. It’s too bad Alberta doesn’t have a racing series like CSCS in Ontario, where there are multiple classes with all sorts of cars competing side by side. 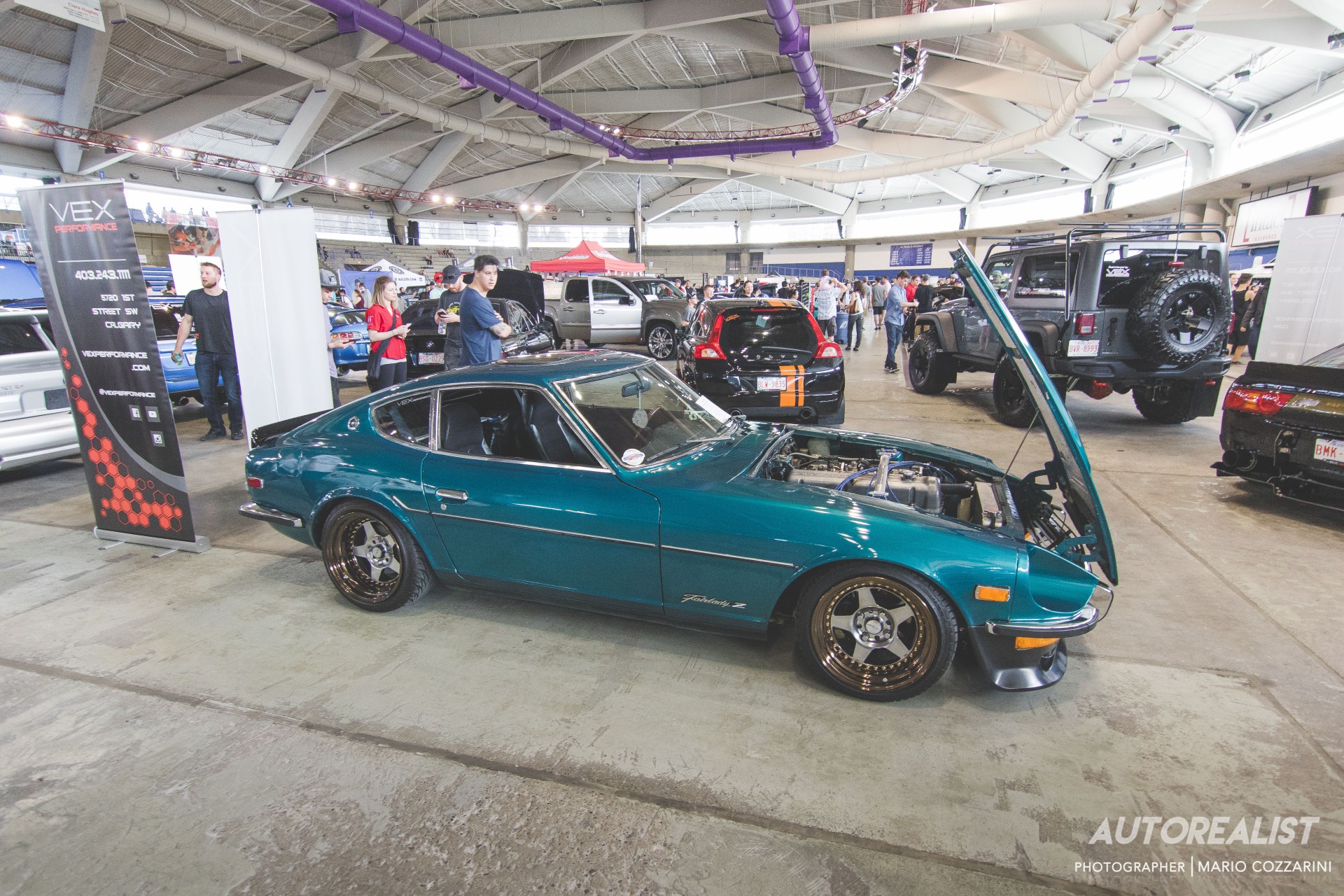 European car specialist Haute AG had a wonderful line up of BMWs. With M3s and M4s parked up, it was nice to see Jake’s turbocharged LS 240 posted up as well. The winner of Best in class S-Chassis had his wheels delivered just hours before roll-in (talk about cutting it close). Congrats again Jake! 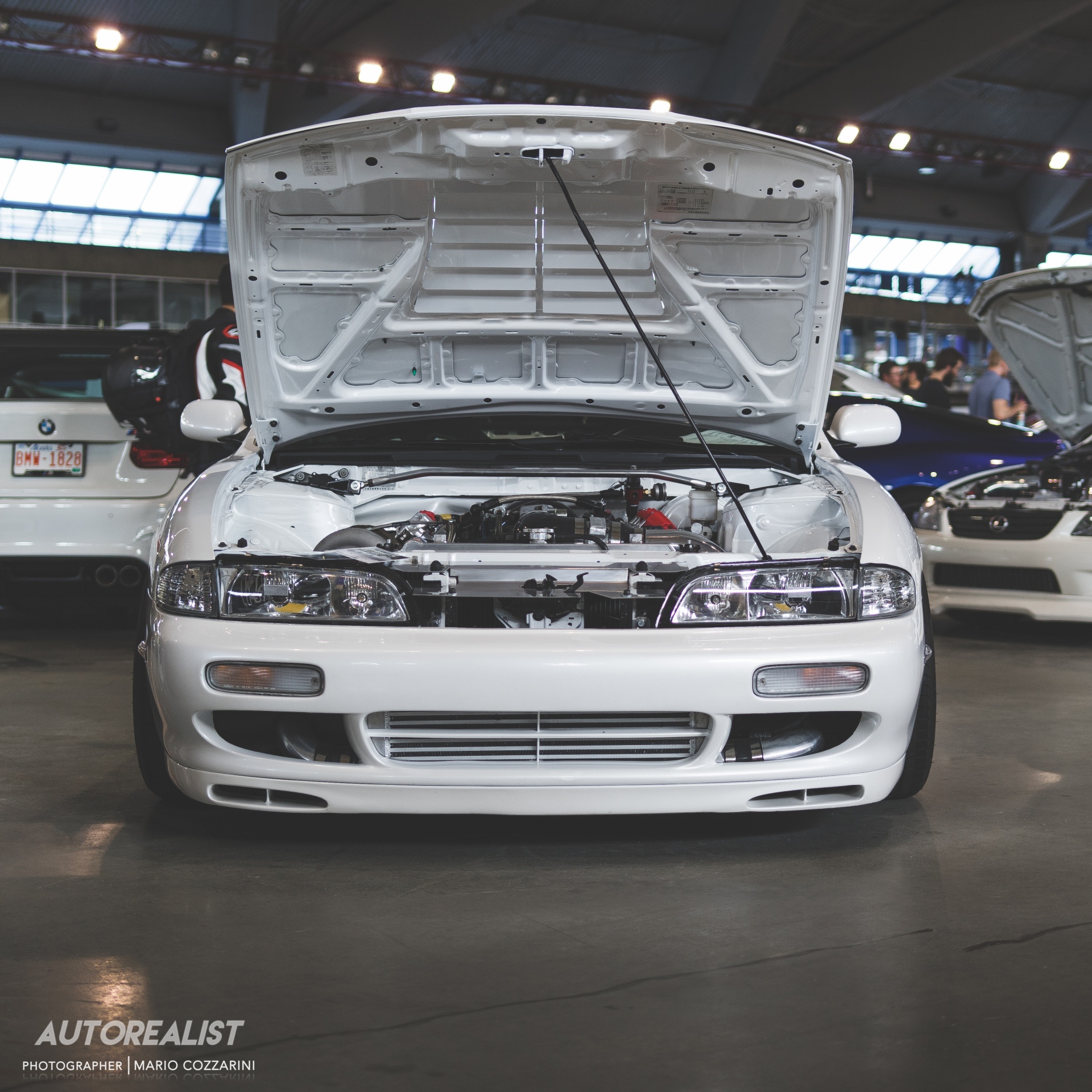 Need to extract the most unicorns out of your Honda and tear lap times all day long? Balance Auto Garage are your guys, specializing in all things Honda and V-TEC 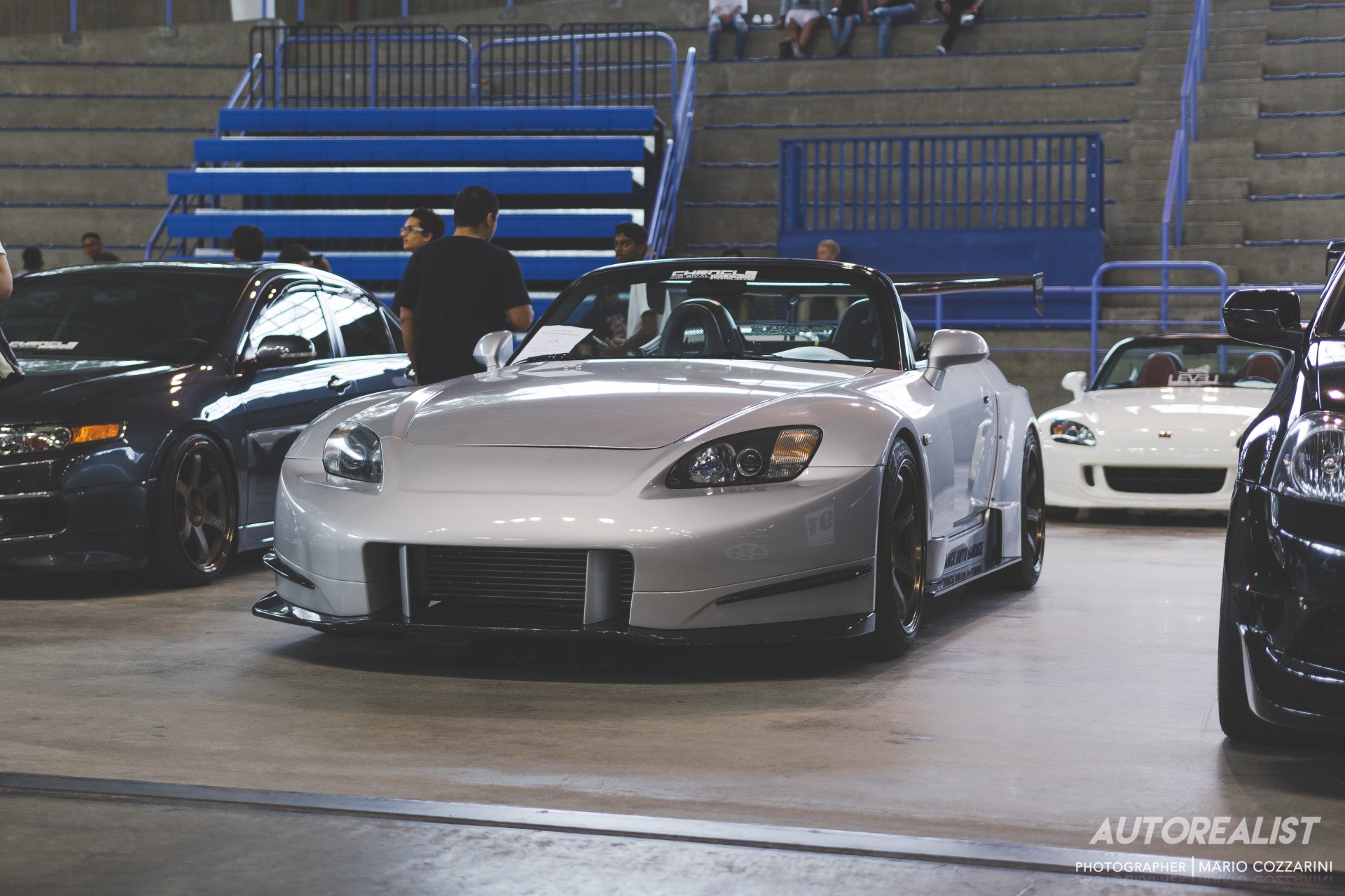 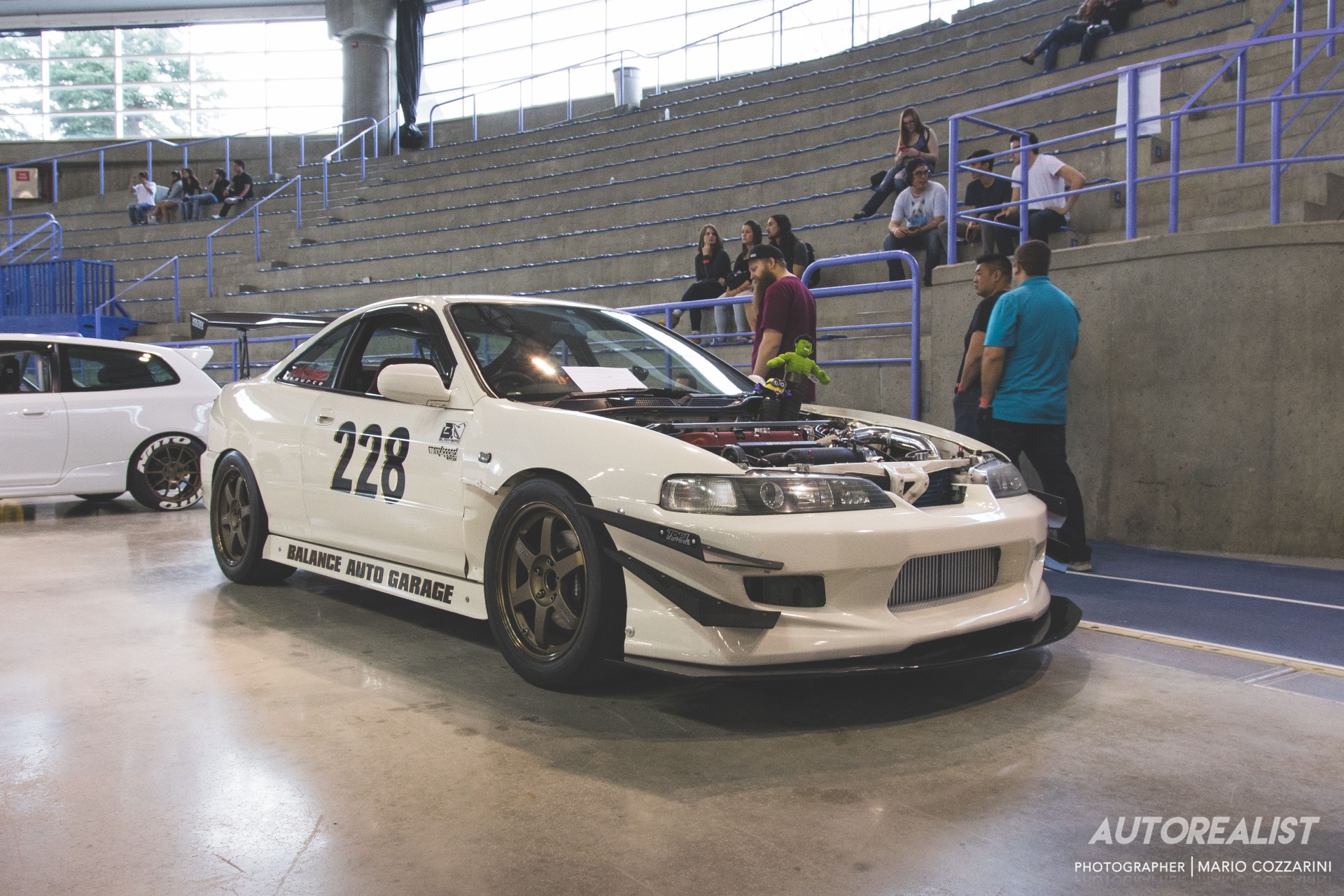 Probably the worst thing I could of have done since buying a new Tacoma, was swing by The Gear Shop. They specialize in off-road applications and have quite the list of goodies for Toyotas. Nathan was great to talk to and showed me a few items that I have on my wish list for the Tacoma. One of their customers cars, this lifted Tundra, is only used when he comes to ski in Canada. An impressive setup featuring some beautiful TE37’s with bead lockers. I am going to be swinging by sooner than later for a shop feature as well as an article on this Tundra. Hopefully I leave my wallet at home. 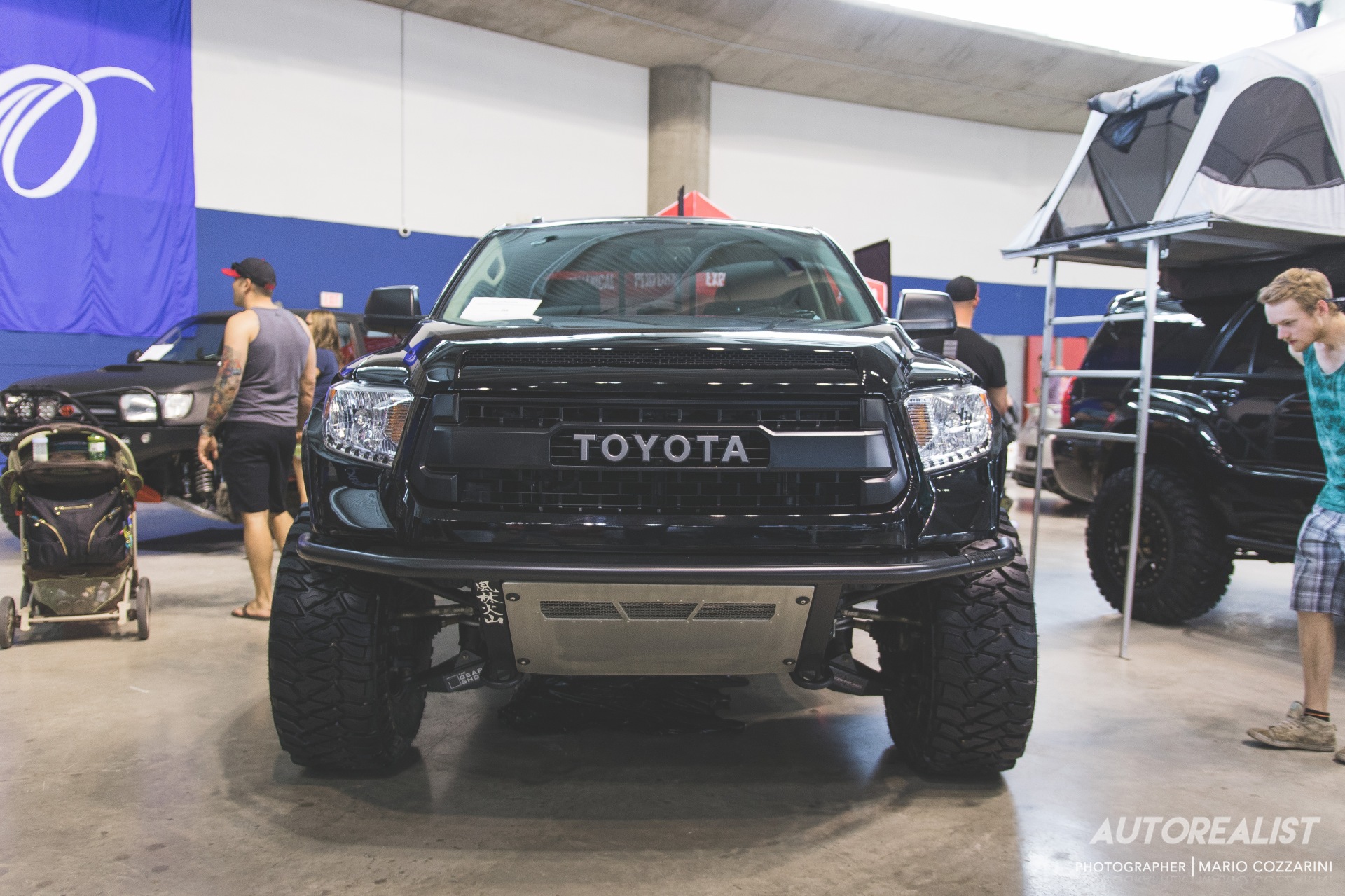 Lost Royalty arrived at literally the last minute, as they flew back from Japan the day before Driven and proceeded to stay up well past 24 hours to get their cars done and ready for roll-in first thing in the morning. Simon, Jerry, Gerrick, Steven and Randy had their beautiful wide bodies laid out on the floor. Congrats on winning Best in Show Crew! Very happy to see where these cars have come in the last year. 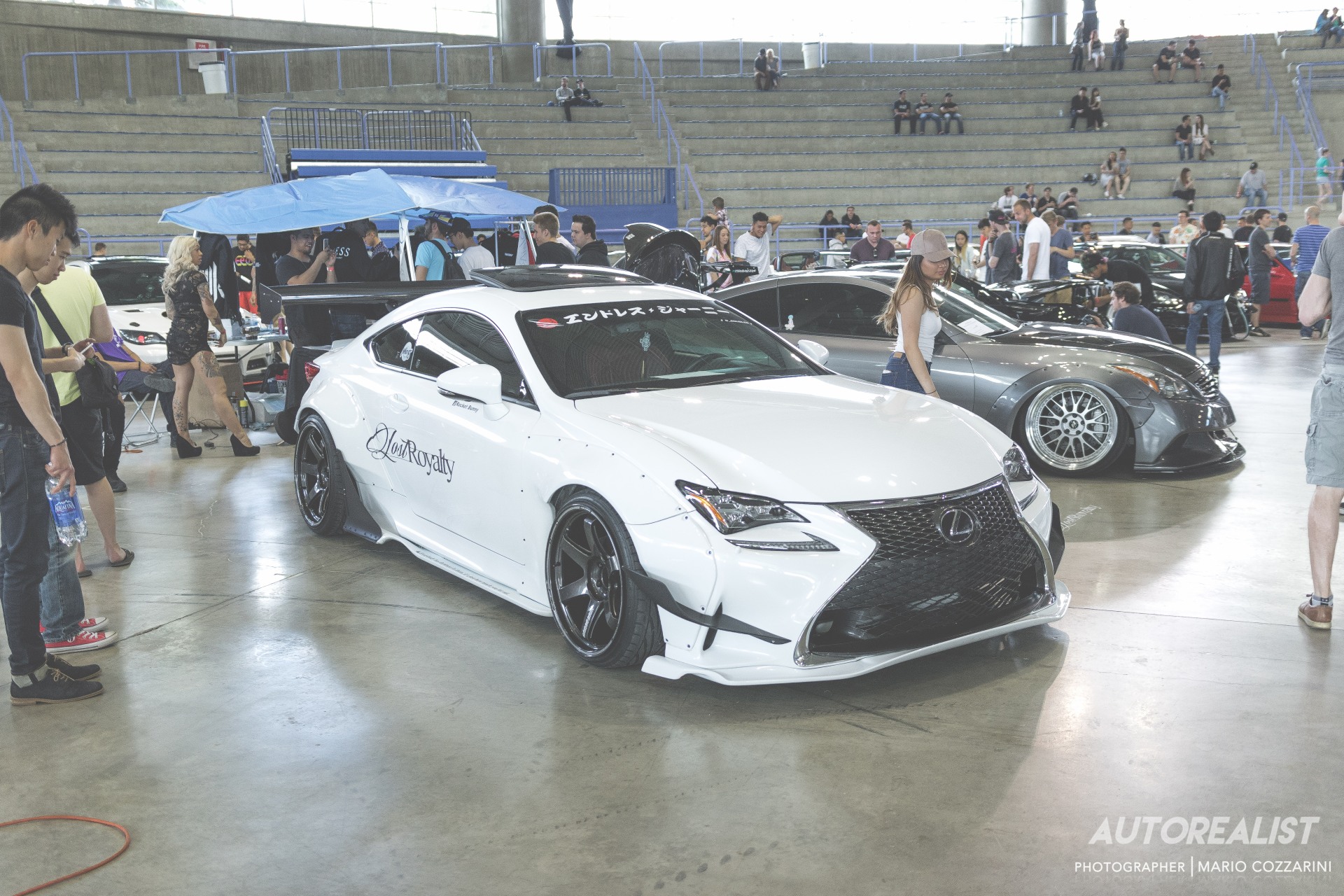 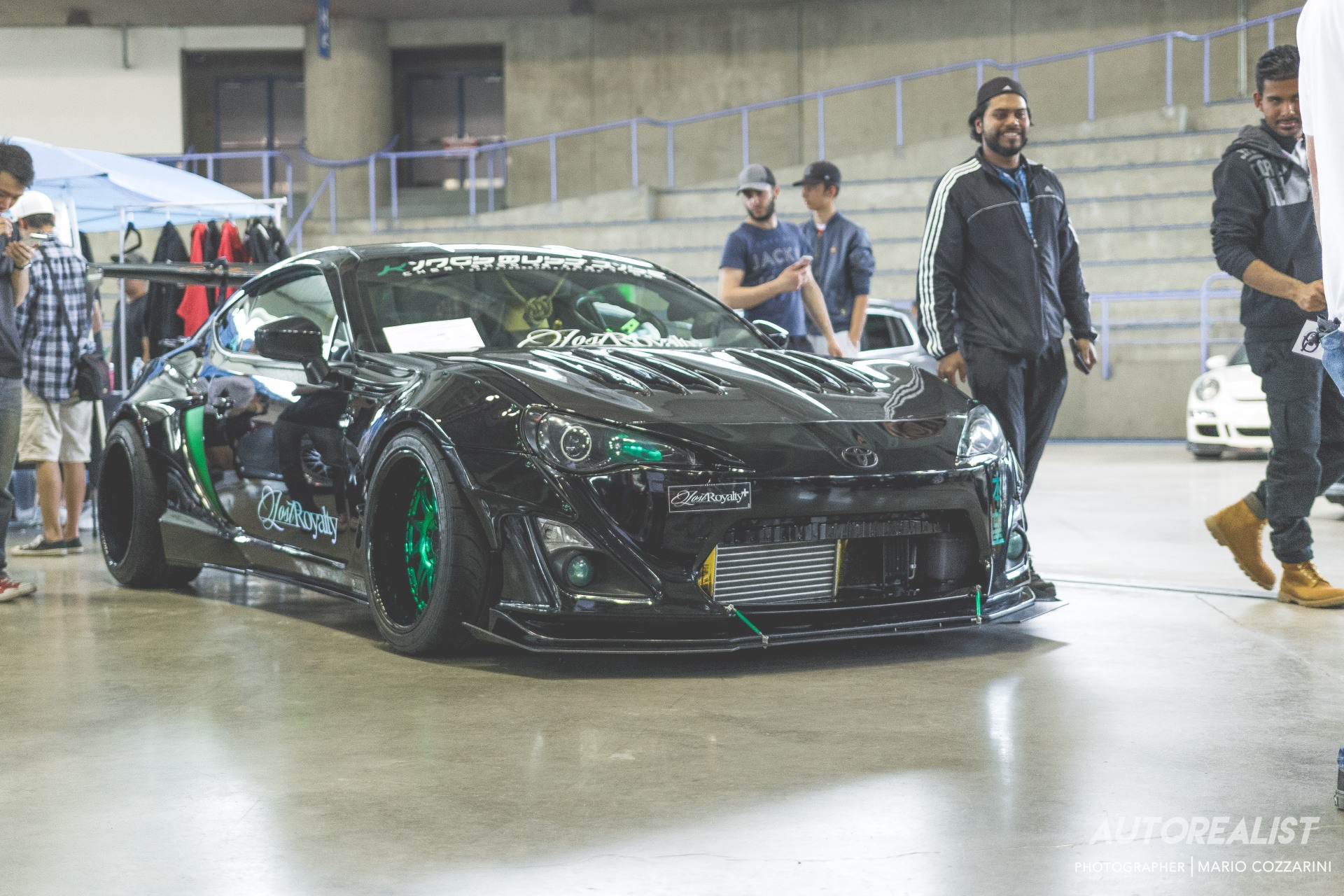 Like last year, I enjoy how Driven has tried to push the truck scene as much as possible. Pictures don’t do these trucks justice, they are massive!

From a few guys in a garage to well-known YouTubers, Lowcals had their cars front and center in the show. With a booth setup and merchandise stacked, they had a constant flow of people of all ages checking in. Look for them at every Driven show, as they are this year’s tour ambassadors! 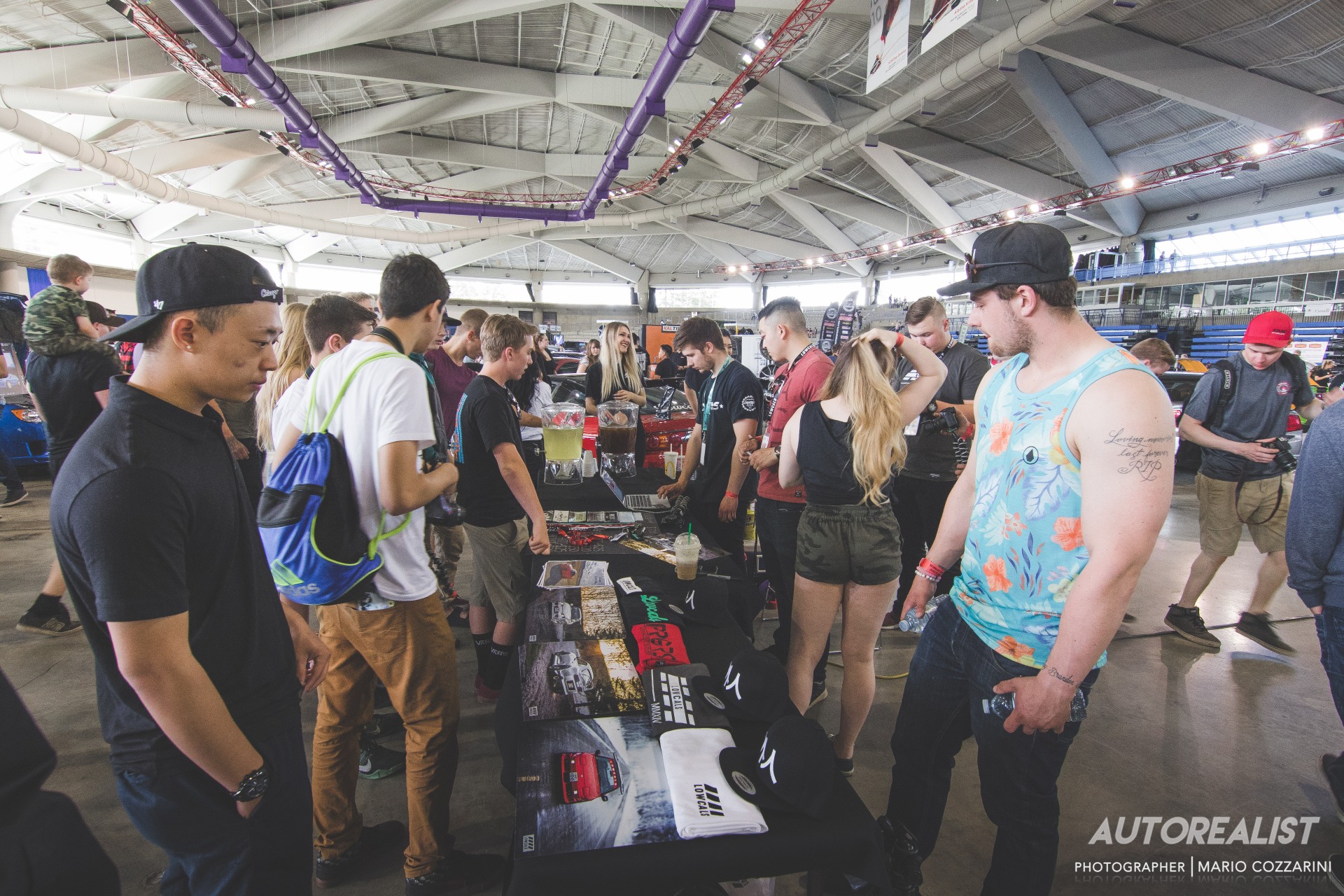 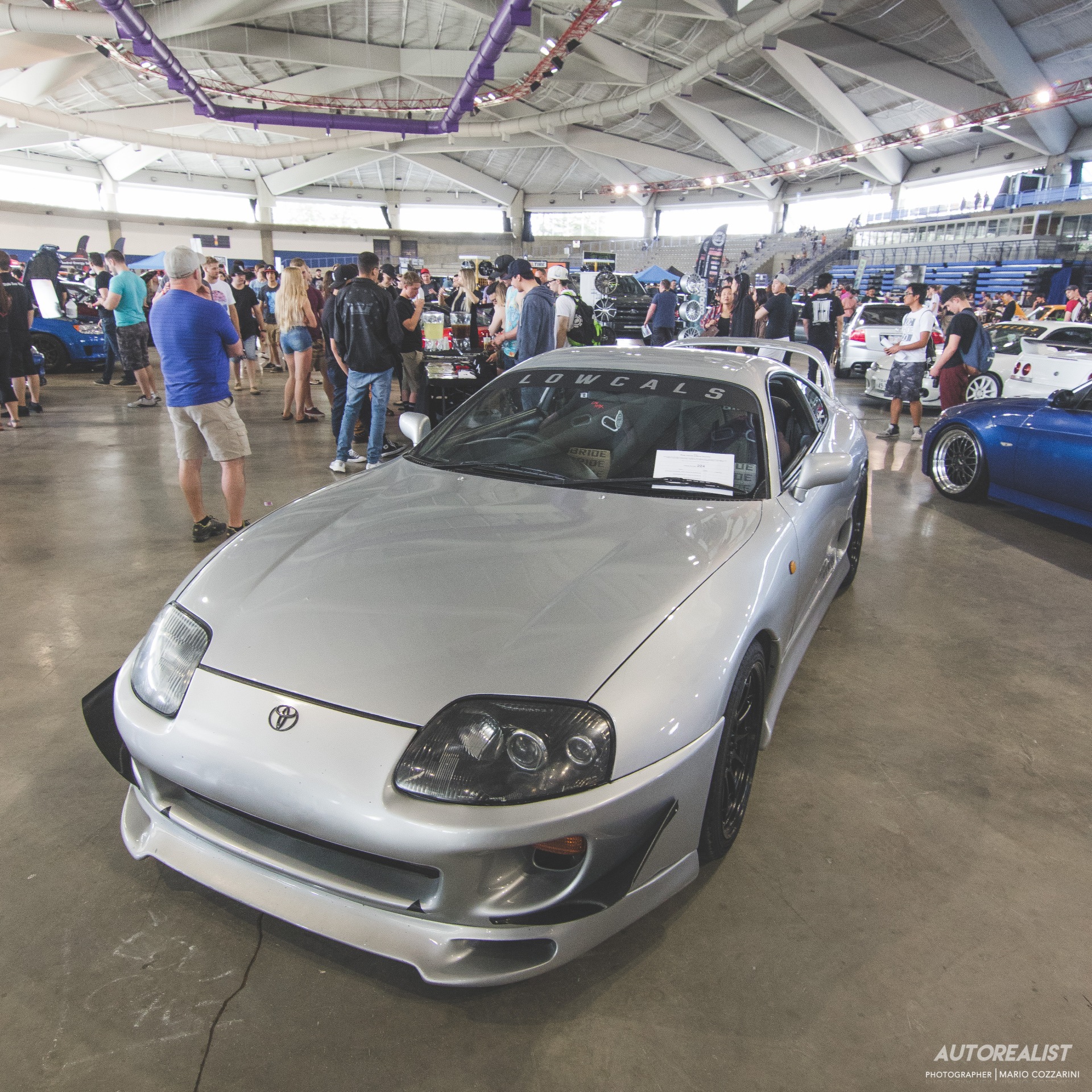 Legit Society did not disappoint, one of the wildest STI’s we’ve seen! 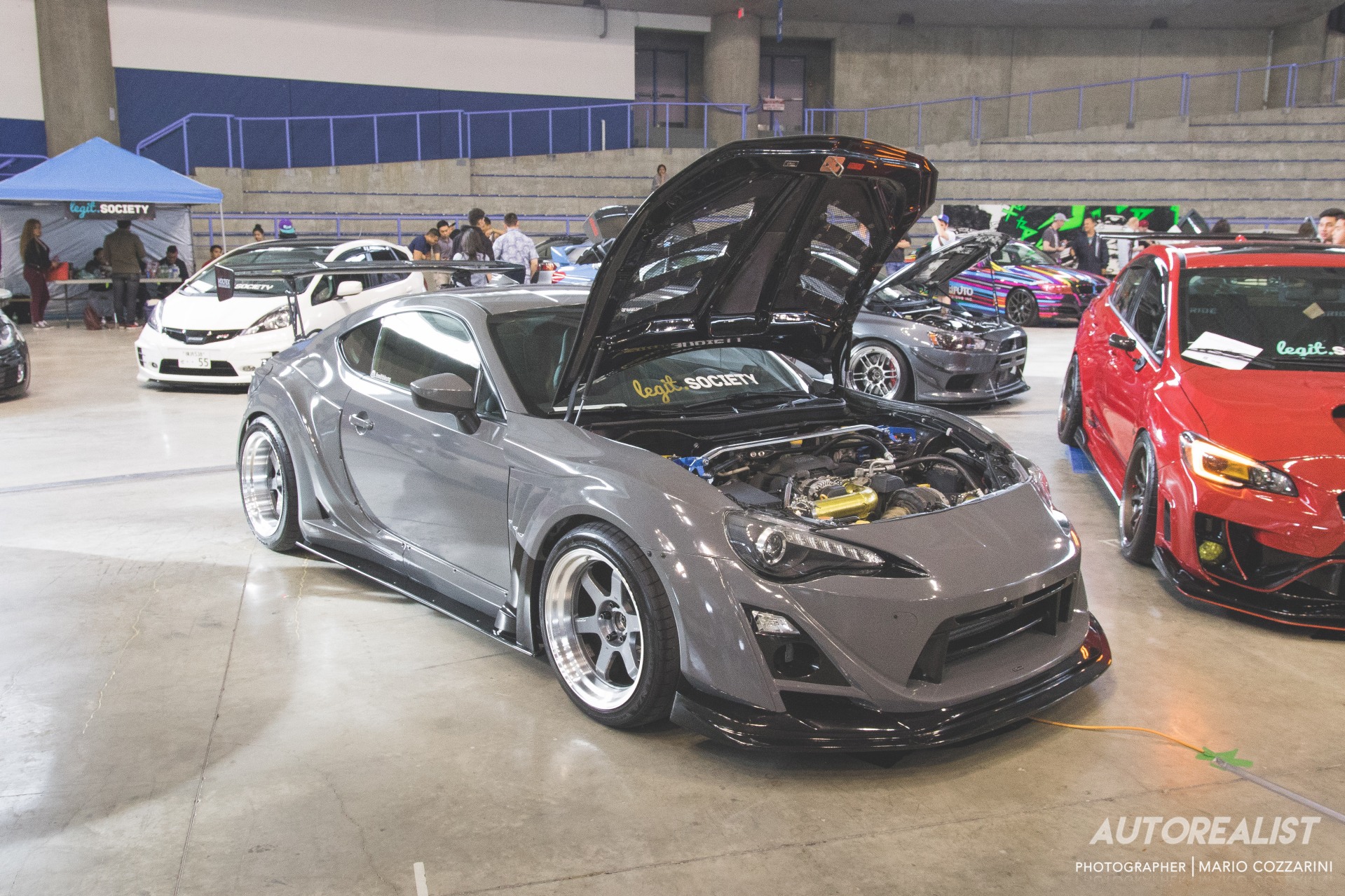 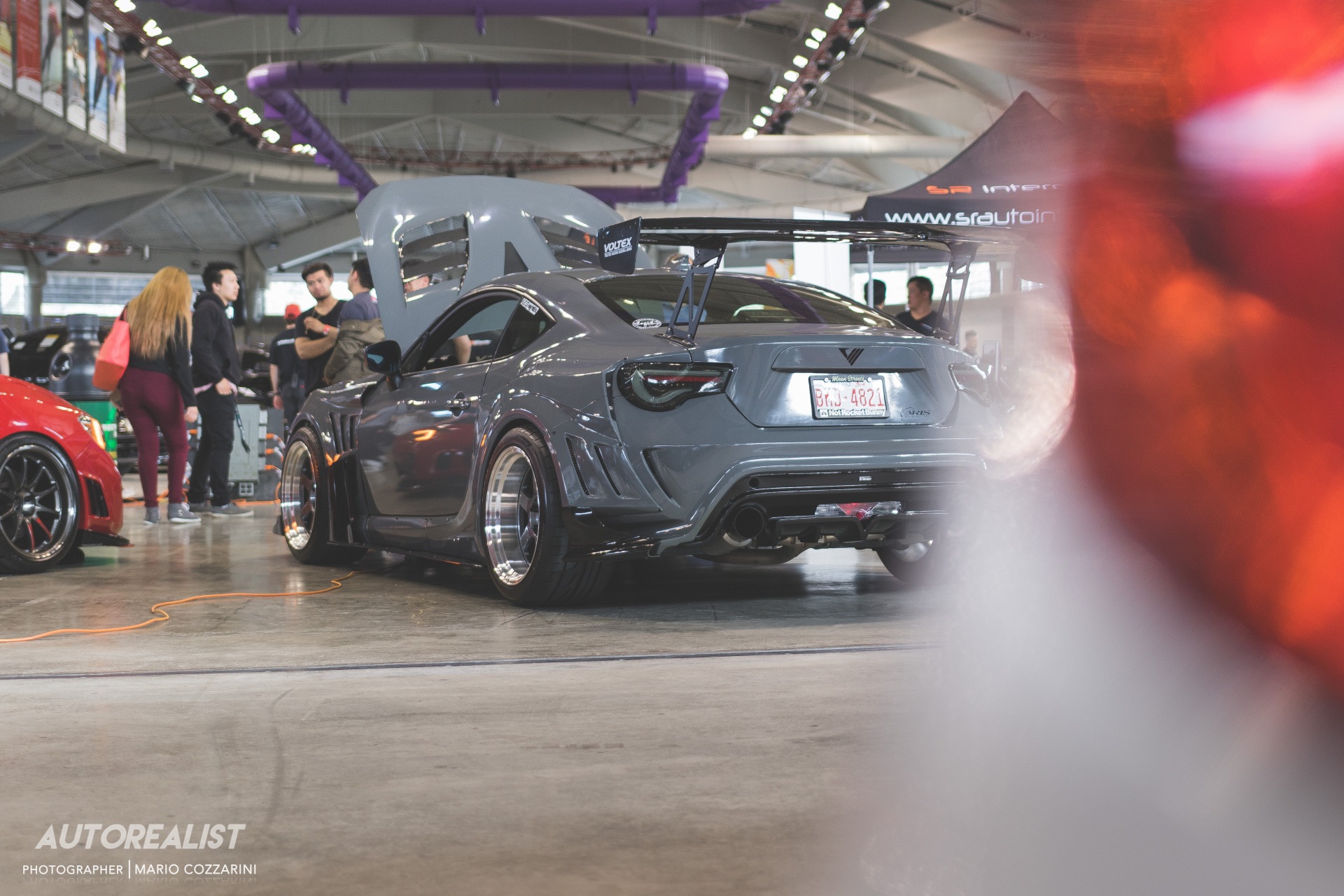 The boys from 403 Media were scraping on every leaf possible on the way to the show. Mastermind Brent who is arguably one of the smoothest videographers around, didn’t let his car get him down. The morning of the show on the way to roll-in, it broke down and there was no quick fix for it. Looking forward to seeing his 18×13-50 wheels in person. Jordan, Calvin and Rob covered the 403 booth with the HOT BOIs running some eye catching dark brown wrap. Reminds you of root beer no? 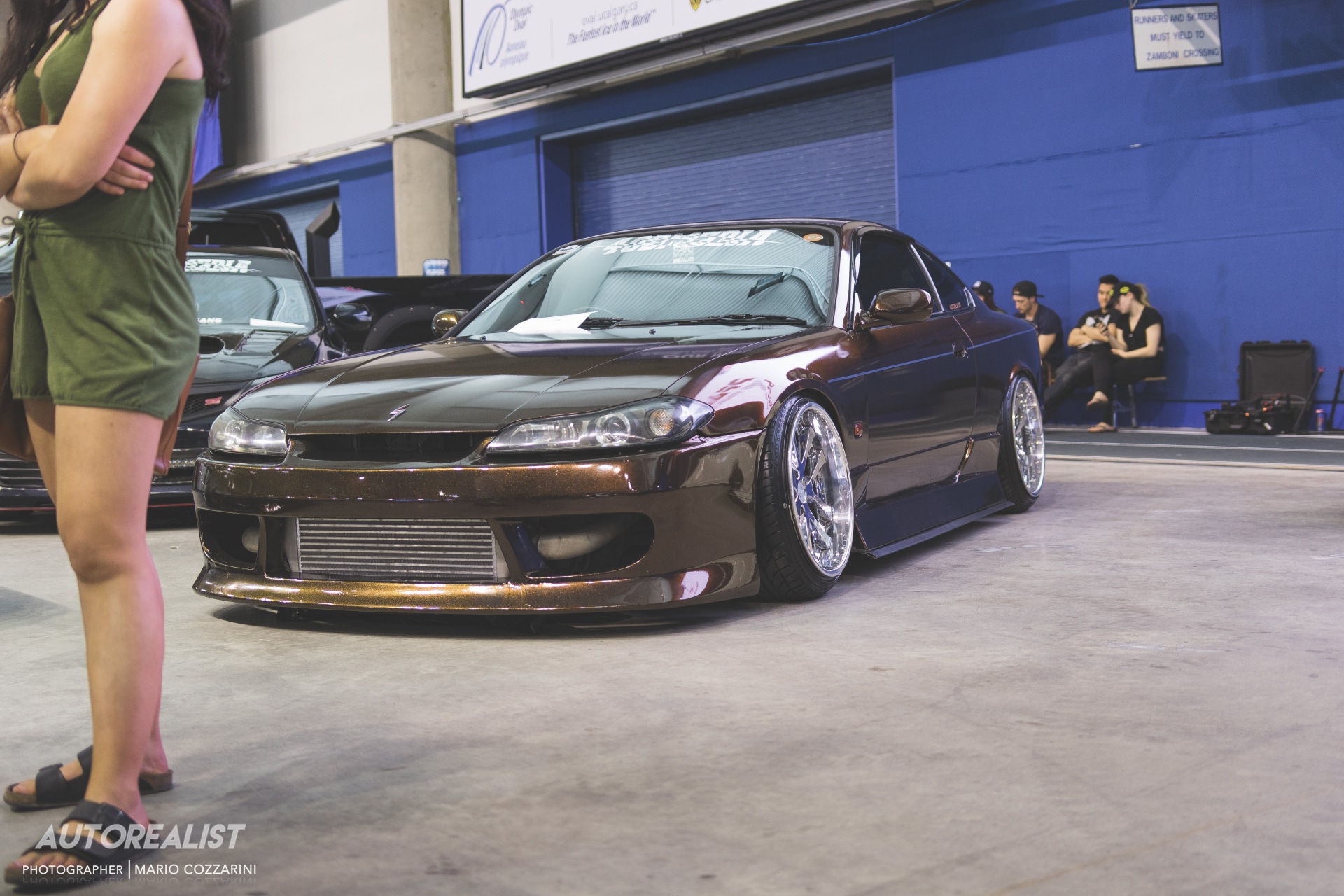 Last but definitely not least, a car that I didn’t think was real when it was posted. Yes, this is a Nissan Skyline R400, one of only 44 ever made. To be honest, I freaked out and chased this thing around as it tried to park. The car was designed by Nissan to celebrate the triumph and success of the Nismo GT-R LM. Some people may not give it a second look but seeing something this rare in person is a sight to behold. The owner and I had a great conversation and he is interested in getting something done for the blog, so keep your eyes peeled for an absolute cracker of a shoot that I will do my absolute best on. 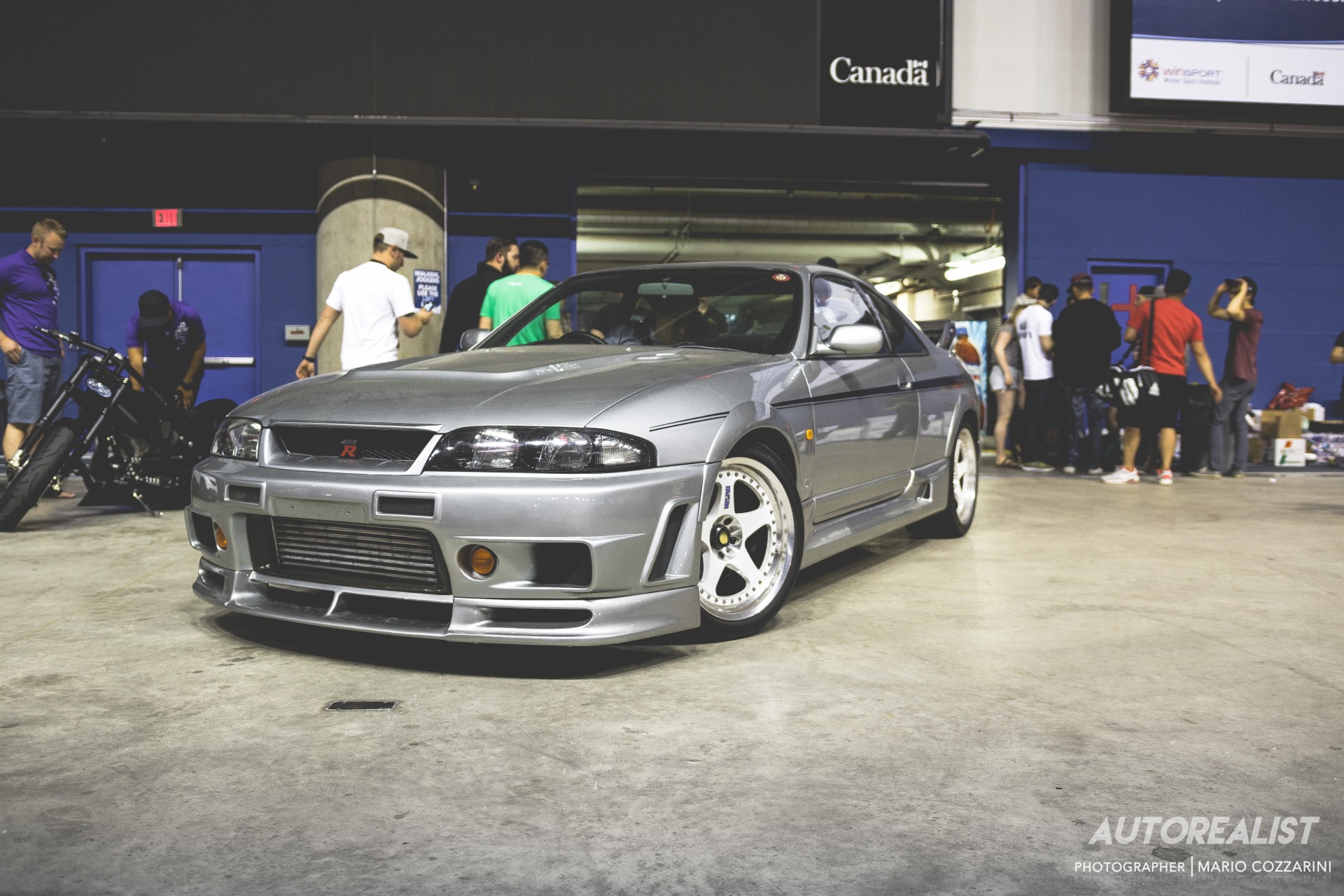 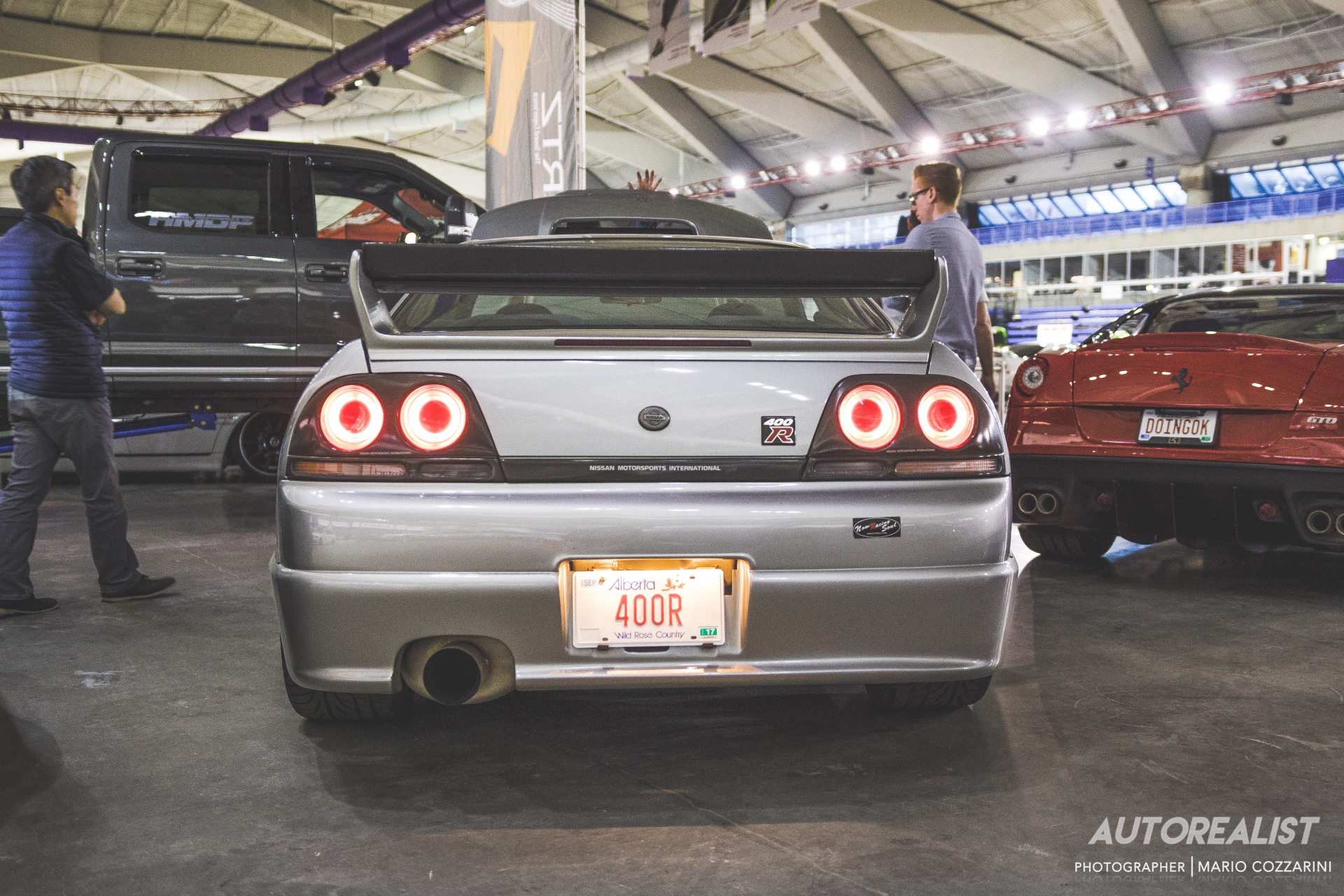 I would like to thank Mark and his whole team for putting on such a fantastic show. Every year they continue to put on a bigger and better show, all while keeping it extremely organized and professional. I would like to thank everybody that rocked our new slaps and stickers and represented our little blog proudly. You guys are the ones that keep us going and allow us to produce content. As always, thank you Calgary for throwing it down. Looking forward to next year! 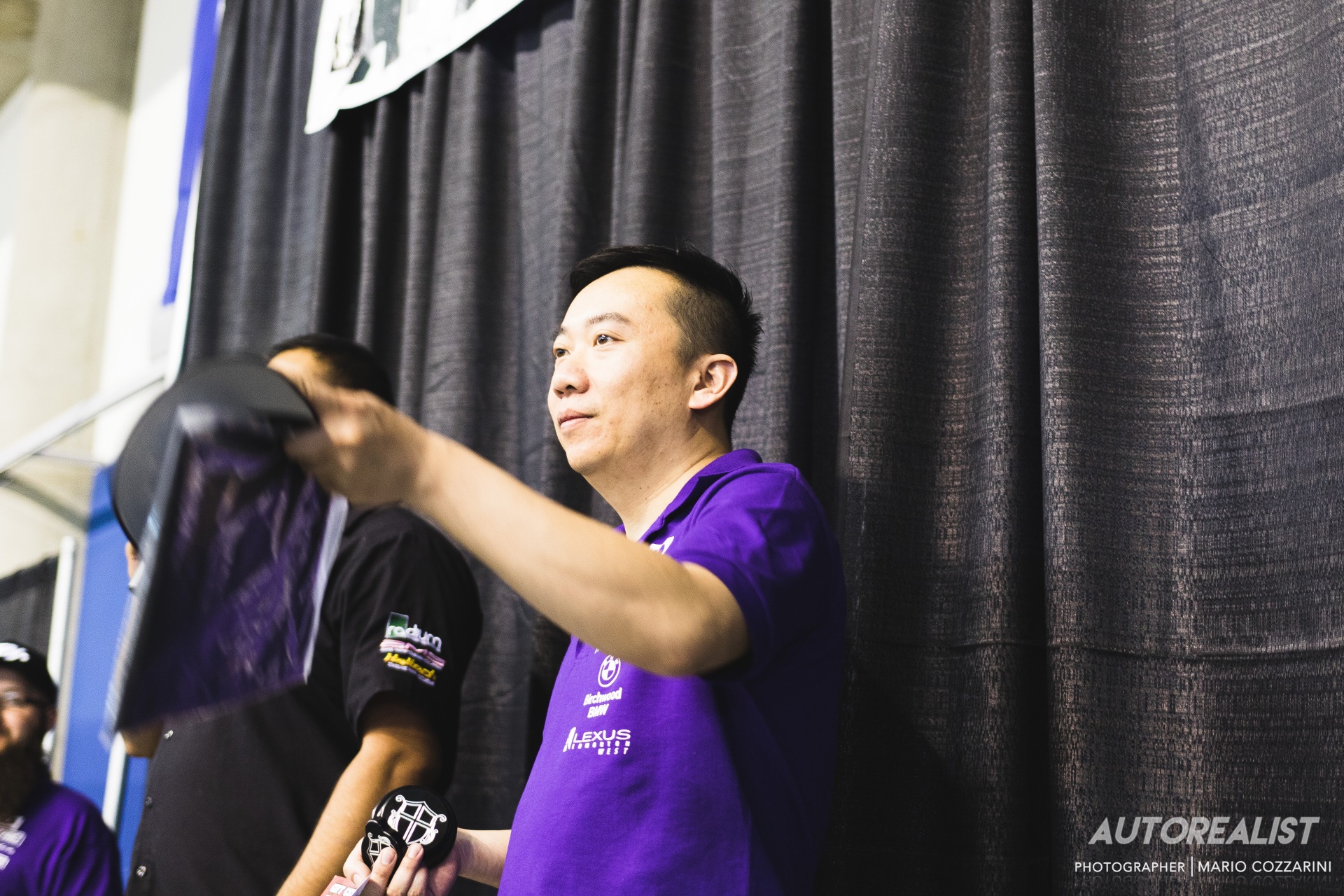 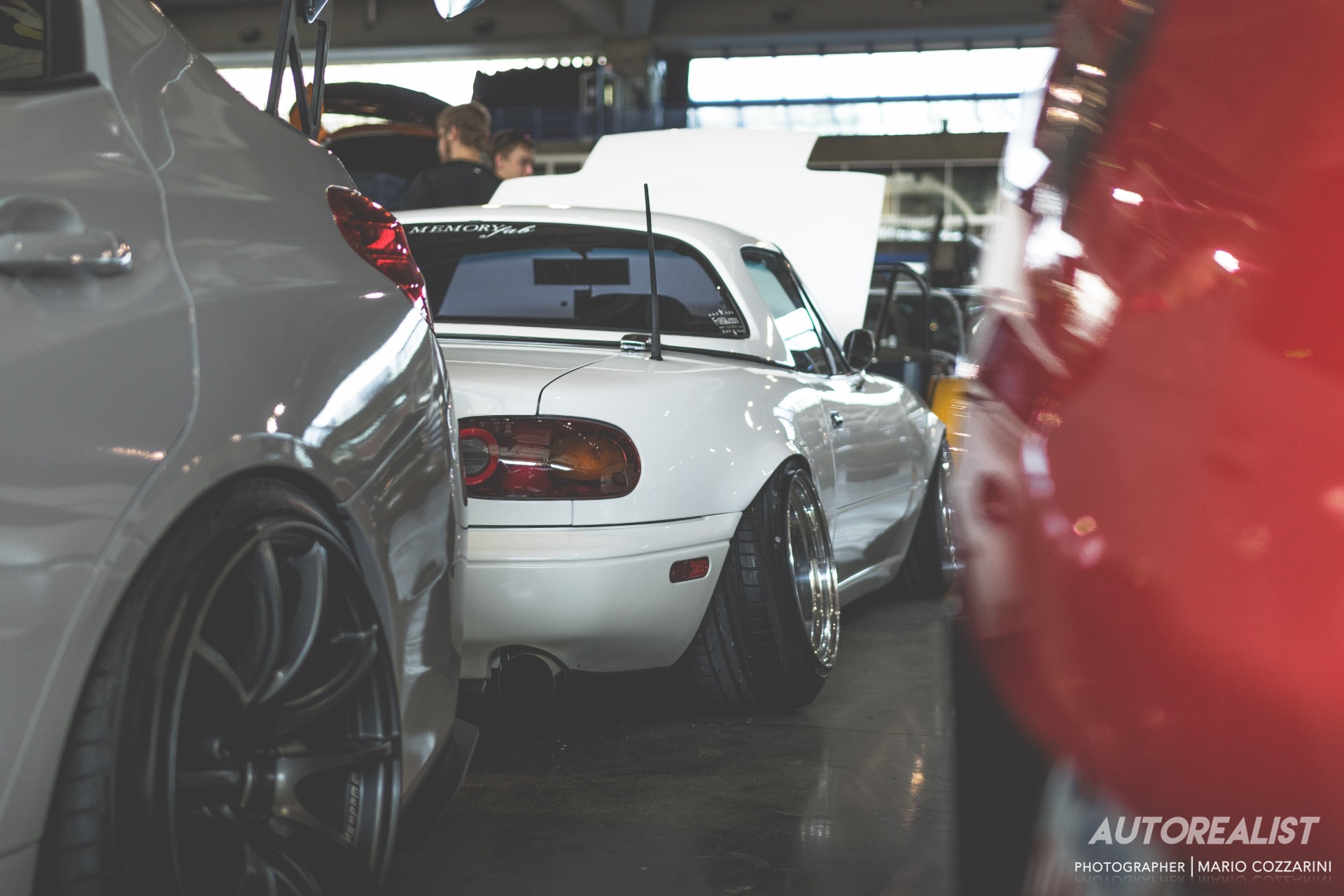 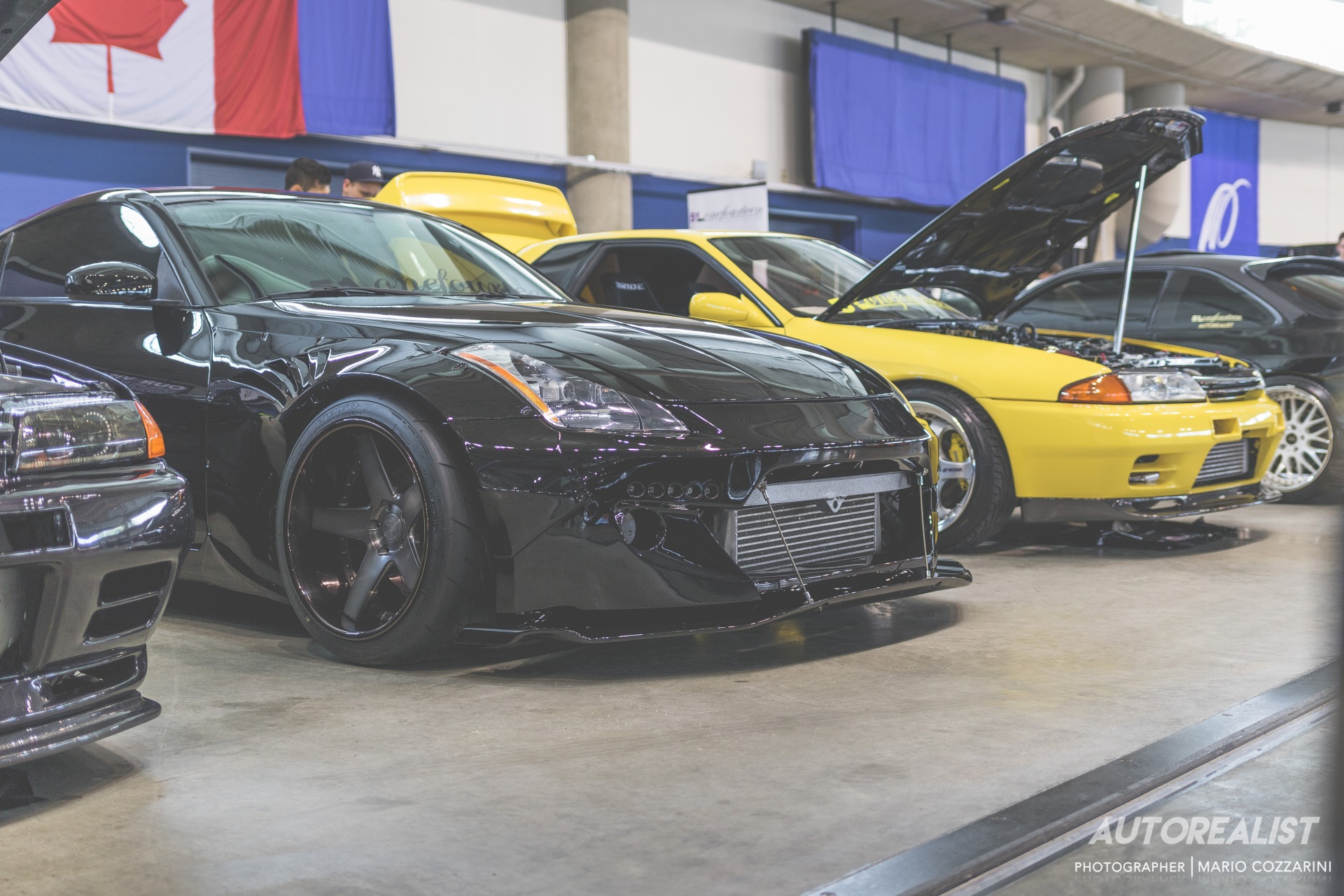